This is from a blog that I have been following. I want to get the word out too, about Sasha, he needs a home so badly. So, if this speaks to your heart, please pray.

this is the blog it comes from:angel eyes

This weekend I was driving on one of my favorite roads and noticing that some of the leaves were already starting to change to the slightest yellowish orange color. A reminder that summer is over and my favorite season is beginning. There is just something about fall that speaks to me. As I drove I thought about all the things I love about fall...spiced candles, warm apple crisp with vanilla ice cream, beautiful bright colors of red, green, orange, yellow, and brown, the crisp refreshing air after a long hot summer, jeans and sweatshirts paired with flip flops, apple cider, the smell of fall....and just with that thought, BAM....I was slapped upside the face with the thought of Sasha.  Sasha is a three year old boy with Down Syndrome living in Zoya's old orphanage. The thought of him derailed my happy train and I found myself trying to put the train back on the tracks with no luck.  The thought that came to me was that this could quite possibly be Sasha's last fall. You see, Sasha is three years old and will turn four on July 17th. Turning four years old in Sasha's country is no cause for celebration. In fact it is quite the opposite. Orphanages there are only allowed to keep children until they are four years old. In some rare instances children have been kept longer but it is not the norm and I definitely don't see that happening with Sasha. As sad as the orphanage conditions are, they are a safe haven compared to the institutions the children are sent to on or around their fourth birthday.  So this fall could very well be Sasha's last if someone doesn't step forward to adopt him.

When we were there adopting Zoya we fell in love with him. During that time he had a committed family so we took some pictures and videos to share with them. Recently, his hopeful family had to let him go due to a serious and unexpected illness. My heart aches for this family and my heart aches for Sasha. While we were there Sasha tried so hard to get our attention and would constantly stick his skinny little arm through the bars of his wooden crib and wave like you've never seen anyone wave before. I'm talking waving like he was in a parade or something. He was quite the mischievous little guy as we constantly heard the caregivers yelling, "SASHA!" He always tried to come to the doorway when he was in his walker, he wanted so badly to be picked up and loved on and I wish I could have done that. His platinum blond duck fuzz hair was adorable with his bright blue eyes that seemed to be hanging on for something more that what he had.  His eyes still haunt me. His eyes told a story that was not easy to hear.  A story about a boy who wanted so badly to have a momma and daddy.  Eyes that spoke of the loneliness, but still also spoke of the possibility for his story to have a happy ending.  He was much skinnier than the other kids in Zoya's groupa and very very pale. During our second visit he had a cast on one of his legs and feet but I'm not sure why.

As I drove I felt God prompting me to do a blog post about Sasha. I said out loud in the solidarity of my car, "what difference will it make?" I then spoke some words in my heart that I am ashamed to admit. I said, nobody cares, people want to care but do they really care enough to drop everything and make a promise to save this child no matter the cost? (or one of the other 147 million orphans).  I thought, if I do a post, people will read it and stop for a moment to think of him and maybe pray for him, but most will just move on with their day not giving him much more thought than the few minutes it took to read the blog (I'm guilty of this myself when others post about other children needing homes....let's face it sometimes it's easier to just forget that child's face because then it doesn't hurt us...we don't let it penetrate our hearts trying to protect ourselves).  If only someone else could see Sasha how we saw him and see him for the gift that he is waiting to be to some family somewhere in this world.  Nobody else CAN see him though.  Not many other people know he even exists (besides his previous hopeful adoptive family who I know are praying that he find his forever family soon). I thought seriously God, if I post about Sasha you really think that will make a difference? When it comes to the orphan crisis, a suffocating feeling of defeat helplessness sneaks up on me when I least expect it. But then I got an email from another RR adoptive momma pointing me to THIS AMAZING BLOG and I think this email and this blog were God's kind way of slapping me upside the head and saying, "Stop your pity party and realize you ARE making a difference....you are being a voice for the voiceless and encouraging others to embark on their own adoption journey...just by writing and sharing you ARE witnessing to others as I've asked you to."  The Archer family has joined the orphan army and committed to adopt a little girl with DS from Eastern Europe. Another one saved! What does this have to do with me? I didn't think much until I read the blog. You will have to read for yourself to see (read 'The Red Thread Part 2' specifically). In just a few emails I had an impact on another family who ultimately decided to save a child's life. Am I trying to toot my own horn? Absolutely not, I'm trying to convince and remind myself of what God is trying to show me...that even if I'm only a pebble in a pond, I can still make a ripple. Even if I'm only one domino, I can be the domino that causes another one to fall, and so on and so forth.

I know God has a plan for Sasha, but we are human and we aren't always open to hearing God's plan. I know his previous committed family feels God has a plan for him as well....and as difficult as it is for them, I know that they hope and believe God will reveal Sasha to his forever family.  Recently I learned that there are a lot more people reading this blog than I had thought. Am I speaking to Sasha's momma? His daddy? Please hear my plea on behalf of this sweet boy's life. Please, even if you are not Sasha's family, join me in the fight to find his forever family. Pray for him, donate to his grant fun (which is already at $4,000!! woah), pass along his profile to anyone you know that is interested in adoption. Be his voice with me. I have some videos and photos of Sasha if you are interested please email me privately (spbasile at hotmail dot com).


Is Sasha your son? 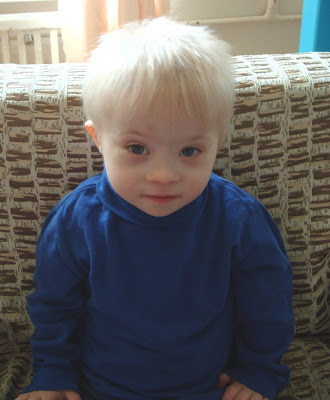 (photo taken recently in May)
Posted by Crystal at 7:51 AM