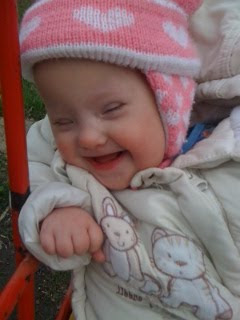 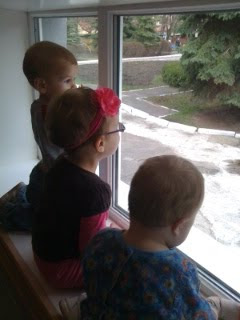 Today was a really good day. This morning started out a little hard, because Justus woke up at 5:30, and Malika was having a hard morning. I prayed and asked God for something to help me get through the day. I was lead to read Ephesians 6 again. For some reason I have been stuck there, so when I heard Ephesians again, my first thought was that I must not have learned what I needed to learn from it. It talks about putting on the full armor of God and that we fight not with flesh and blood, but powers and authorities of darkness. It really did help me to read over it again, because yesterday was a really hard day and I wasn't sure how I was going to get through today.

Yesterday, I went to the orphanage on my own in the morning. After about an hour, Kaylee fell asleep, one of the nannies (she is the only one who has never smiled at me and she always glares at me in the hall. I think she either hates me or Kaylee), anyway, she saw Kaylee asleep and stared at me for a bit, then talked to two other nannies. Then she came over and started yelling at me, for about 5 minutes. And she was so rough with Kaylee. I didn't understand the words she was saying, but I got the message. After she yelled about letting her sleep, she got angry and said something about not taking her outside (I was standing next to the door, just looking out), I had no intention of taking her out. Anyway, when I managed to wake Kaylee up, she just cried. I took her back to her class and one of the other nannies yelled at me again. Seriously, I think they think that since I don't understand them that I am stupid. When I left, I cried. I really tried not to, but it was just so hard. I called and talked to Marina about skipping the evening time, she said that was fine, so we took the kids to the park and to get ice cream instead. It was nice to just spend the evening with Malika and Justus, but I felt bad about leaving Kaylee with the mean nanny.

So that scripture really helped me this morning. I didn't want to go to the orphanage again, but I know that I am fighting something bigger than mean people, I am fighting the powers of darkness and there is nothing to fear in people, afterall, if God is for me who can be against me.

Today was sunny and warm (for Ukraine), we played outside all morning and most of the afternoon time. Kaylee did so well outside and all the kids had so much fun.

I can tell Kaylee knows who we are now and likes us, in the beginning she did not like going outside and she screamed often. Now she is so happy to be anywhere with us, and rarely screams anymore. The screaming was unnerving because I didn't understand it and I wasn't sure if it was a DS thing or an orphanage thing. She would do it at the same time as throwing herself backwards. She still does that some, but less. I kind of think she just likes the way it feels.

I have completely fallen in love with this little girl, I just think she is so beautiful, I love her almond eyes and the way they close when she smiles and laughs. I love her little chubby cheeks and her short and stubby fingers.

In all honesty, the love was not immediate and it worried me. I thought I would love her the moment I saw her, but she was nothing like I imagined, that little girl never existed. I had stared at her picture for so long that I fabricated a little girl in my mind, but that was the only place she existed. The real little girl didn't love me, she smelled bad, and had strange behaviors. I really had a hard time with whether we were doing the right thing, because it didn't feel right. I didn't think I would ever love her. I wanted to write the truth about it on my blog, because I thought others going into this needed to know the truth, but I was afraid to, thinking people would always wonder if I loved her or wonder if I thought of her as my own child. But now that I can say I truly love her, I can also say the truth. This is hard, it isn't sunshine and roses and it doesn't always look pretty, and definitely doesn't smell pretty, but that is ok. We may have hard times to come and hurdles to get over, but she is my child, just as if I gave birth to her, she will be no less in my eyes. And well worth it.