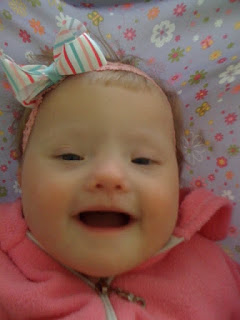 Kaylee has been sick for the last few days. Today she seems a lot better to me, but the nannies make it seem like she is worse today. I was so worried about her a few days ago because she had a fever and was having trouble breathing. I haven't been able to take her outside, I think they think the cold air is what makes you sick, not germs. Then today, I was told to keep her away from the window. I just follow the rules, but I think they are strange. The strangest thing they told me was that all children with down syndrome are not allowed to eat red foods. I wonder where they get their information from.

I haven't taken Malika and Justus to the orphanage in a few days because of Kaylee being sick. And since we can't be outside, I don't want them to be around her and get sick also.

It is very difficult being there by myself, it makes the time drag by. I have a ball, a bag of wipes, a paci, a teether, and a baby for 2 hours, 2 times a day. She is pretty content with the wipes. It is funny that that is her favorite thing to play with. It is becoming more difficult to entertain her, especially since she is sick. She just wants to sleep, but I am not allowed to let her, so she cries. I feel so bad for her.

This morning when I got her she had a bite mark on her arm. I pointed to it and they said this little boy did it. It seems hard to believe, because he just seems so sweet. I wonder why he bit her, especially since they aren't even in the same crib. I wish I knew what happened when I wasn't there.

Things are so difficult here, I am trying to stay positive, but it is much easier said than done. The hardest part is the language barrier.

Josh will be here in 7 days and we have court in 8 days. I asked about waiving the 10 days, but was told by Marina that they won't do it in this region, so it looks like it will be another 3 weeks after court.

I wish I could post pictures from my camera, they are so much cuter.