Since bringing Kaylee home, I have struggled with wondering if we really did so much for her by taking her out of the orphanage. I know in the long run, we have, but she just seemed so happy there. And she was well fed and seemed loved. But, tonight, after discovering a new orphanage behavior, I realized she may have "seemed" happy, but was probably just coping. She may have not known she was coping, since it was all she ever knew.

Kaylee has had sores and scratches all over her. I knew she was scratching herself, but I didn't realize how bad it was, until I realized the sores are from her scratching. I thought they were just bug bites and maybe they started out that way, but are now infected. I have been watching her the last few days, wondering why she has big welts all over her legs and now understand after watching her scratch her legs raw. And there are what looks like bite marks all over her crib. That is what I thought they were, except, I just couldn't understand how they got there, since, she does not have top teeth. Now, I'm thinking they are from her scratching it. Her poor little nails are so tore up.
This just makes me so mad. Not at her, but just that she has had to resort to that in the past to entertain herself and it now seems to be a habit. This even bothers me more than all of the eating issues she has, I think it is because she is hurting herself, and doesn't even care.
And then it makes me mad to think that some mothers think they are doing what is best for their child by putting them in the orphanage. We saw that everyday while we were there. Some of the mothers would come and visit their child everyday, but still wouldn't take them home. One little girl in particular, I fell in love with and would go back to get her, if only she were available for adoption. I saw her mom come to visit her and I could tell she loved her, I just wish she were told she could have a better life and that she would believe it. An orphanage is no place to live. 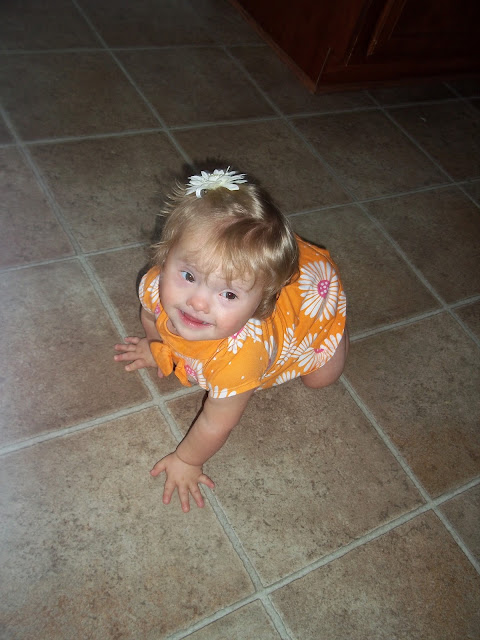 Kaylee is starting to crawl correctly now. Three weeks ago the PT said to go back and only work on crawling, since it is so important. So, we did and it has paid off, because this last week the PT said we don't have to put an emphasis on either anymore, since she was doing so well.  I bought some new shoes for Kaylee and they have helped so much, she is walking and crawling better because of them.
Posted by Crystal at 1:17 AM