The other night Kaylee fell asleep in the car and actually stayed asleep when we stopped. Usually she is such a light sleeper and wakes up very easily, but that night she didn't wake up, so I was able to watch her sleep. When I was staring at her, I just thought " how beautiful she was". It makes me wonder what her mom looked like and also makes me wonder what she would think if she saw her now. I just think she is so beautiful and smart. I wish her mom could see her and see that she is going to be something when she grows up.

I know I keep saying it, but Kaylee is just so smart. She has learned that when we go through a drive thru that means we get food and she just gets so excited and starts squealing. She has learned that if she refuses to eat vegetables, mommy might feel sorry for her and feed her something else. And if she keeps signing please, mommy will think it is so cute and give in to her and give her more to eat.
Ok, seriously she is smart. Yesterday, she learned to sign "cheese" after I only showed her one time. Cheese and french fries are definitely her favorite foods. She doesn't really like fruits or vegetables, she still eats them though. I'm really not sure if she ever had fruit in the orphanage, she still makes a face when she eats them. She also loves bananas, but I'm not sure if it would be something she would request or if it is just because she eats so many of them. One day, I was thinking about it, and wondered why God only made one fruit that did not have to be cut up and was so easy for babies.
I think she is loving this american life and is starting to show her independence and personality more. She knows what she wants and if she doesn't get it, she will definitely let you know. Sometimes, I think she knows she wants something, but either can't tell me what she wants or maybe she isn't sure what it is she wants, just knows it is not what I am doing. Last week, we were outside and she reaches up and grunts to be picked up, so I pick her up, then she wants down. Then she wants in her swing, then wants down. Then wants on the slide, then wants off. Finally, I just say "enough" and just let her figure it out on her own.
She has figured out how to go up and down the stairs too. And has figured out that bedtime is not her favorite time. She used to be so easy to put to sleep and would not make a peep. Now, I let her climb up the stairs on her own, but she is so smart and when she figures out that it is bedtime, she slides all the way back down, with a huge smile on her face.
For anyone wanting to know, she is doing so much better with eating. I do still sit next to her while she eats and have to keep a close eye on her, but it is still way better than it was. She does not usually shove her mouth full anymore and takes bites of things, even if they are bigger than I'd like. The last week, she has done pretty well on chewing, but goes back and forth. She is very good at her pincher grasp now, but still has to be reminded at times.
I have a question for those with children with DS, do your children stick their tongues out when they eat? The OT said we really need to work on it, but she just isn't getting it. I know it is a common thing for DS, but really, is it all that necessary to do anything about it? It is kind of gross, but it isn't really bothering much. If I make her keep her tongue in her mouth, she does better about chewing, but I have to watch her like a hawk. It has only been about a week, should I just keep at it, or give it up for now? Oh, yeah, she sticks her tongue out when she is trying to swallow something.
This is how Justus woke up from his nap one day. 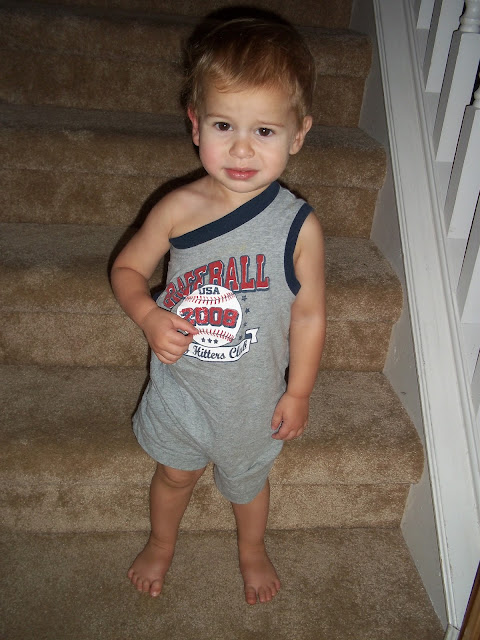 The kids wanted to play with the hose in the front yard, then Kaylee decided to just crawl in the muddy water, so I said "Oh well, have fun" 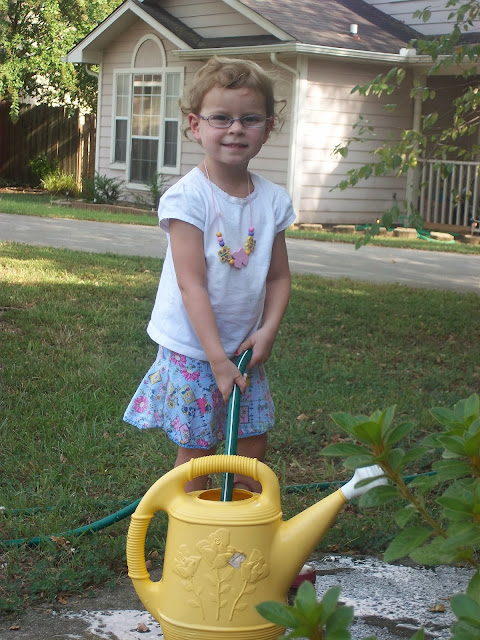 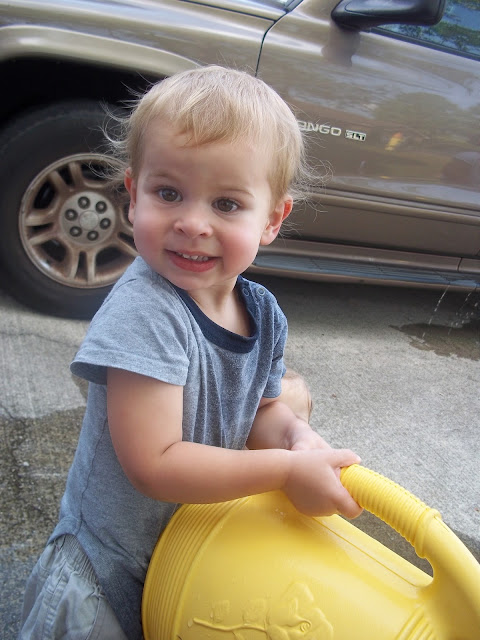 Kaylee has somehow figured out that she should smile when I get the camera out. 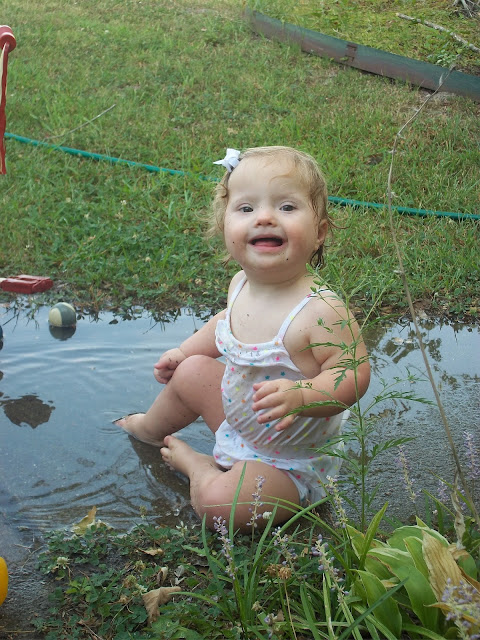 I love this smile. 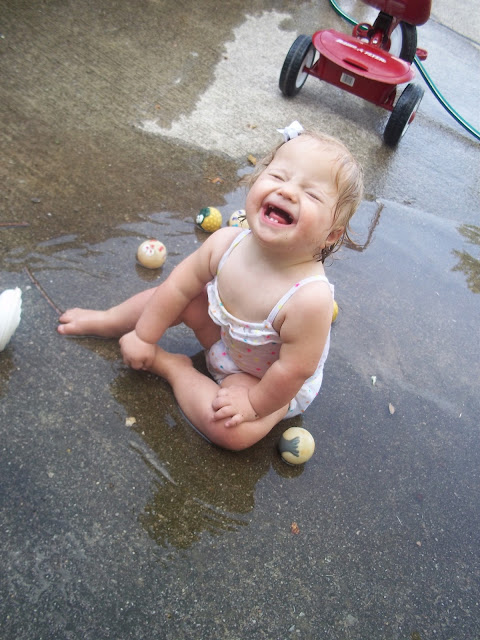 I know this picture is so blurry, but he is just too cute 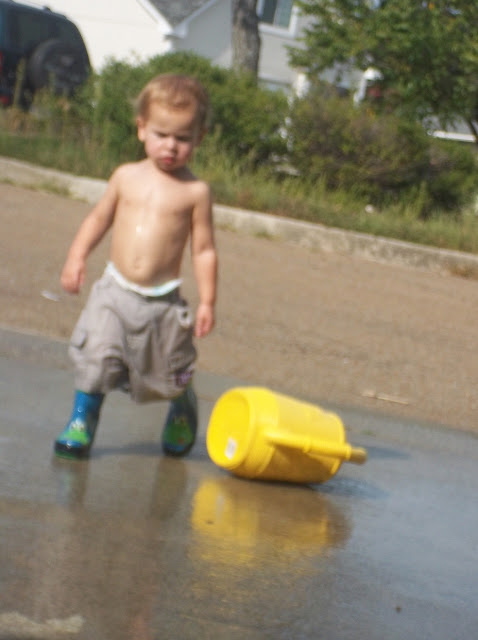 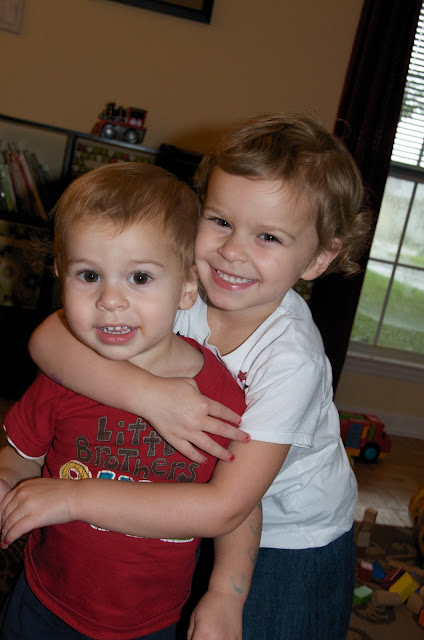 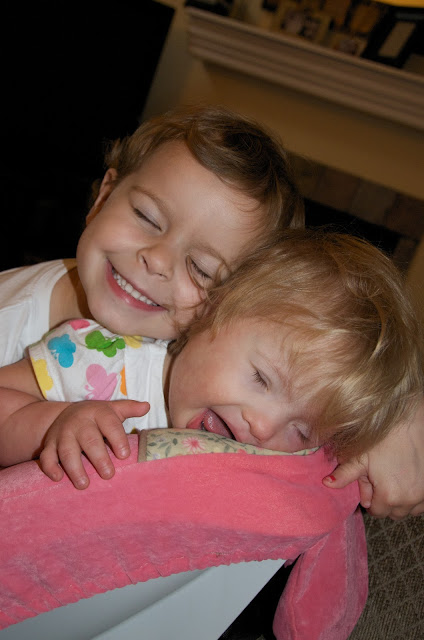 I put Kaylee in this pack and play so we could work on the bathroom floor and not have her into everything. She really does hate it, but with Malika and Justus joining her, she has a blast. 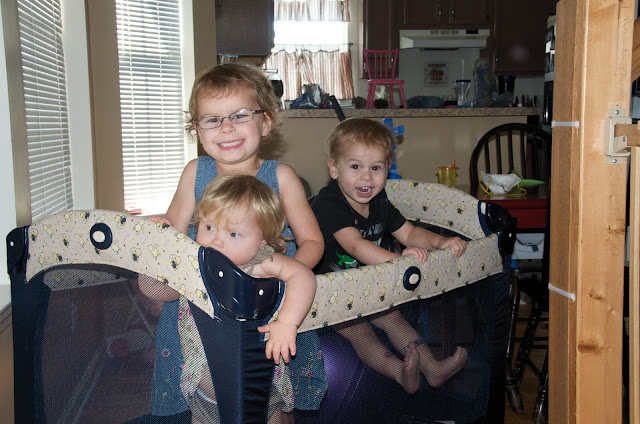